Brace yourselves. This post is gonna be big. This is pretty much going to be an explosion of my brain’s thoughts – reflections of the past year and anticipation of things to come in 2015! Oh yes, I’m back and rambling more than ever. (Hopefully, not too much. I still have to make dinner.) Last year was another 365 days packed with interesting things and people and stories. While I would’ve liked to write more, I want to think of these experiences as ‘research’… and I’m not talking about at the lab bench. 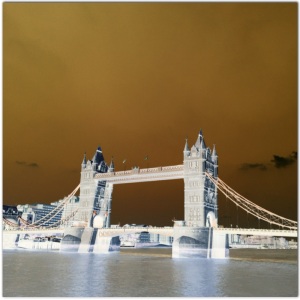 LONDON In the spring I had every intention of seeking out new books (and different book covers) and seeing what this city of old literature was all about. We visited the fictional 221B Baker Street address of ‘Sherlock Holmes’, gawked at old ‘Alice in Wonderland’ books through a closed shop window, finally did the tourist thing wandering by the iconic London Eye, Parliament, Tower Bridge, Millennium Bridge, a bunch of other bridges crossing the Thames River, traipsed through Hyde Park and Regents Park, and hung out with one of my best friends in a city of history and people watching. London might not be my city (not really a city girl anyway), but it was a fun and relaxing somewhat spur of the moment trip.

SAN DIEGO COMICCON 2014 This was my brother and my 3rd year at SDCC, and as usual it was freakin’ awesome. Aside from the panels, I met authors at signings and accidentally on the exhibition floor. We hung out on the pier and listened to Video Game symphonies and the music of Danny Elfman, camped out by the water like the other crazies for the big panels, made friends, was fortunate to attend a Nerdist podcast.

I got a whole lot of swag and ARCs which I’m still plowing my way through (and trying to review as I finish them) and watched my brother run the Walking Dead Escape again (always a good time). These huge comic conventions can be a bit overwhelming because there’s so much to do and so much stimulation. The crowds are horrendous. You most likely won’t be able to attend everything you want, and it’s exhausting as hell. But honestly… it’s worth it. It’s a place where thousands of people with common interests from all over the world congregate to have fun and be free to enjoy what they like, no judgement. (I might’ve actually said that in a past post.) I love it, and hopefully, we’ll be able to keep on going every year. Tickets become increasingly difficult to obtain.

Oh, and did I mention that I bleached and colored my hair and everything for this event? Probably as close as I’ll ever get to wearing a costume at SDCC and probably the last time I ever bleach and color my hair. 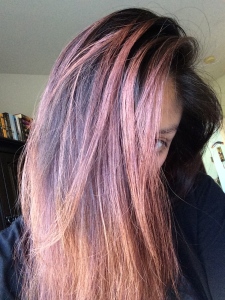 But my favorite moment of this year’s event??? The 10th Anniversary for ‘Supernatural” panel… and… receiving a coffee in the morning from Misha Collins, the actor who plays Castiel on the show. FANTASTIC. I can finally say that an angel bought me coffee.

VILLAINS AND NEW YORK COMICCON 2014 The end of a ComicCon is usually marked by exhaustion and a little bit of sadness. Kind of like when the hustle and bustle of Christmas time is over. However, after July’s event, we looked towards October and Halloween and New York ComicCon. Finally, in a last minute chance to get to a dear friend’s villain costume party, I sported an Alice look… albeit, the Alice inspired by American McGee’s version. It was dark and silly and awesome and full of laughter. I hobnobbed with the devil, Cruella de Vil, the Queen of Hearts (much to my delight), Harley Quinn and the Joker, Catwoman, and a handful of other fantastic villains… they are my favorite characters in the books after all. 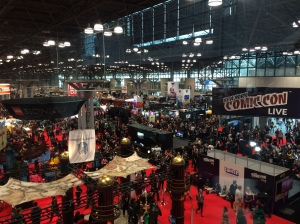 NYCC was packed – I think the largest attendance it’s ever been – and just as exciting as expected. Prepared with a book (or Kindle), an apple and other snacks, music, and reviewed schedule, we endured lines and people packed like sardines at the Javits Center. I wonder if I’ll ever get sick of squeezing through the mobs. Again… worth it.

My favorite experience of the event? THE DISNEY

PANEL! We attended the presentation for a preview of ‘Tomorrowland’ – 2 names: HUGH LAURIE and GEORGE CLOONEY – Whaaaaat?!?!? Yes! Both charming and talented, both side by side and making fun of each other, and both awesome. And then there was winning an advanced screening of ‘Big Hero 6’ where we watched the movie in NYC WITH THE VOICE ACTORS!!!! I sigh happily just thinking of how lucky that all was. 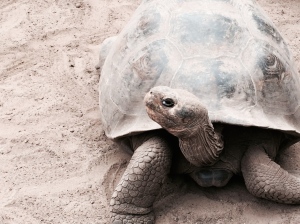 GALAPAGOS ISLANDS This was a trip on the bucket list. It originated from me and 2 of my adventure friends celebrating another friend at the bar, closing our eyes, and pointing at a map. Making it happen. While the journey to South America and the connections in between, not to mention spending the night tied to my luggage at the airport in Ecuador, weren’t exactly the most desirable must-haves for this kind of trip, once you’re in the islands, it’s unreal. 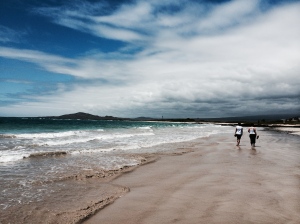 Probably one of the best kept environments in the world, people visit from all over to experience the land that hasn’t changed much in the past few thousand years. Tortoises older than most of us will ever be, blue-footed boobies, penguins, iguanas, pelicans, finches of every remarkable color, lava, blue skies, crashing waves, and the adventure of the land. People have established towns there, but it doesn’t belong to them. We’re all really just visiting.

HOLIDAYS AND BEYOND The end of the year is probably my favorite time of year. I’m a holiday girl, and I love the hustle and bustle. I delight in the lights and the events and my family, friends, and cheer. I repeat-enjoy the music. I embrace the cheesiness. I love the layers of clothes I get to wear. The boots, the scarves, the hats. The days off from work.

And at the end of the year, I think about it, take a breath, and figure out where to go from here. Truth be told I slacked in 2014. I let the wave of events take me and considered it a break of sorts from the previous year. A chance to catch up with friends and family and enjoy life without thinking. I wrote a lot but not as much as I would’ve liked. I read a lot but missed my reading challenge by 3 books. I’m ready to pick it back up again. To enjoy all the lovely, wonderful things I’m lucky to have in my life, and get down to work on things that matter the most to me, so that I feel like I earned some of those fortunate experiences.

All of that being said, I have a big announcement to make. I’ve been finished with the sequel to THE CLOSEST STAR for a long time, and I’ve been going back and forth with ideas about how to share it. Here’s what I’ve come up with. I will put out my 2ND NOVEL FOR FREE! The goal is to post the first chapter of the sequel in February, then a chapter every few days. In the next few weeks I’ll release the title, which online platforms (there will be at least 2) you can find them, some teasers, and some awesome images a good friend of mine created which were inspired by the books. I’m extremely excited to finally share what happens to Sienna Haze and her friends, her new adventures and encounters, and, of course, what happens when a shape-shifter can finally transform.

Where to Find My Books

I’m hooked on the Audible version which then hooked me to the graphic novels. The story, the characters, the production, the terror, the myth, the everything. All amazing and inspiring. ✨✨✨ #sandman #neilgaiman #writinginspiration #stories #favoritethings #booklife #fallreads #octoberreads #bookworm #booknerd #bookdragon #dream #morpheus #theendless
Our plan for the day had changed somewhat, but that’s simply how my coz and I roll, and the outcome is usually magnificent. ✨✨✨🌻🌻🌻 “I am not an adventurer by choice but by fate.” 🌙🌙🌙✨✨✨🎨🎨🎨#aslongaswegotgasinthecar #vangoghexperience #vincentvangogh #writinginspiration #stories #buthisear #booklife #artlife #familylife #cheerstothefreakinweekend #favoritethings
Happy National Book Lovers Day!! Naturally, I purchased a book to add to my ever-increasing TBR. 📚✨😂✨📚📚📚📚📚📚😳#nationalbookloversday #writinginspiration #stories #booklife #favoritethings #bookstack #bookspiral #doyousupposeshesawildflower #booknerd #bookworm #bookdragon
Been on kind of a reading slump these last couple of months. It’s weird because flipping through books is still exciting, but I can’t seem to finish any fast enough. I think I’ve got 6, maybe 7, I’m currently reading, but they’re all in little bits at a time. This wonderful beast of a book, however, is not one of them. I loved the Throne of Glass series. It was epic, and I’d read it again right now if I didn’t have the aforementioned problem. Also, Manon Blackbeak is hero quality. 😂😂🤷🏻‍♀️🤷🏻‍♀️📚📚📚📚📚📚📚😳 #writinginspiration #stories #favoritebooks #favoritethings #heiroffire #HoF #sarahjmaas #booknerd #bookworm #bookdragon #cheerstothefreakinweekend #sleepy #bookslump #manonblackbeak #abraxos
I like the look of it. Have a good day, folks. ✨📖📚☕️🌈✨📖📚 #booklife #bookshelfie #booknerd #bookworm #bookdragon #favoritethings #favoritebooks #writinginspiration #stories #cheerstothefreakinweekend
Cheers to the freakin’ weekend. 🥂🌈🌺🤟🏽🎉📚✨#doyousupposeshesawildflower #alicethings #wonderland #cheerstothefreakinweekend #booklife #bookworm #booknerd #bookdragon #whiterabbit #aliceinwonderland #sleepyhead #bookshelfie